Skip to content
Jenny at dapperhouse Family fun for everyone. A lifestyle blog.
Health Our Kidney Transplant Stories

Finding out my husband was in stage 5 kidney/renal failure was a real shock. He had been previously diagnosed with IgA Nephropothy so we knew that it was coming. We just expected it to be 5 – 10 years later rather than right now. After seeing his regular kidney specialist and doing some research, my husband decided that he would go to RUSH hospital for his care. His kidney doctor explained to us that the first step would be going to a 5 hour appointment that would consist of meeting with the multidisciplinary team including: a nurse coordinator, dietician, pharmacist and transplant surgeon.

We are professional people, so my husband and I dressed according to the anticipation of a business meeting in a boardroom with knowledgeable discussions and handshakes at the conclusion. It was a “meeting with the professional team” after all. Our experience was not what we had expected when we went to the hospital in Chicago. We were out of our element and taken aback. It took an already fragile situation and made it sad.

Once we arrived at to RUSH Medical center in Chicago, we navigated our way through a maze of hallways and corridors until we were somewhere in the center of the building. Finally, we turned a corner and saw the glass door ahead that led to where we were supposed to have our appointment. I held my breath as we walked in, both nervous and excited to get this process underway so that my husband could be well again. It was an over-crowded waiting room with not enough seating for everyone. There were awkward exchanges with the nurses at the reception area. There was no direction or explanation once my husband checked in so we turned around to the room filled with people and waited for two chairs to open up. Then there was the sitting and waiting.

Doctors are often running behind on their schedule so we thought nothing of the time going by at first, but eventually my husband and I both truly began to wonder if there had been some accidental mix-up with the appointment date. Paul went to discuss this with one of the receptionists and they offered to look into it. Meanwhile we sat some more. Nurses would come to the door holding handfuls of “tickets” in their hands and cycle through them while reading off the names. Paul never lost his calm and cool in this situation but did mention after all this time that he felt like “just another car in line at the carwash”. This, in my opinion, was an accurate observation. (We later learned that the tickets were a series of stickers printed off with barcodes and patient information to apply to blood vials and paperwork.) 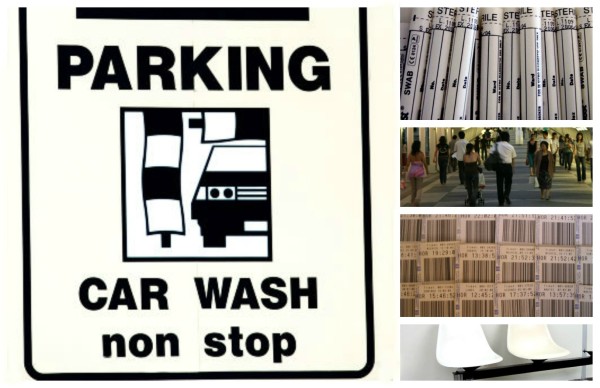 Eventually Paul was asked to go into a room where they took his blood pressure and vitals. Then we waited some more. We certainly do not expect to be treated to medical care in luxurious settings but the stark reality of why we were there was compounded by the worn surroundings. We met the nurse coordinator who gave us a spiel about kidney failure and other information that we already knew. Then to our surprise, she told us we were free to go and follow up with our doctor. My husband and I looked at each other confused and told her that we were supposed to be meeting with “the transplant team” today. She assured us that we were mistaken and again told us to go follow up with our doctor. We believed that she was the expert and we had no idea what to expect, but I had a bad feeling about this so I stood up from my chair and was emphatic. She re-read my husband’s file and looking surprised, said that she had been reviewing last year’s numbers not the recent ones. She apologized.

I was unnerved that they were going to accidentally send us home. There was another instance of mistaken identity with another professional and I was truly shaken! I felt that my husband’s well being and medical health was being compromised. How can we just laugh and shrug off “accidents” like this when every test, appointment, dietary plan and medication is so vital to living? Literally staying alive! What I am most resentful about is that my husband went from feeling hopeful that day to feeling totally insignificant. 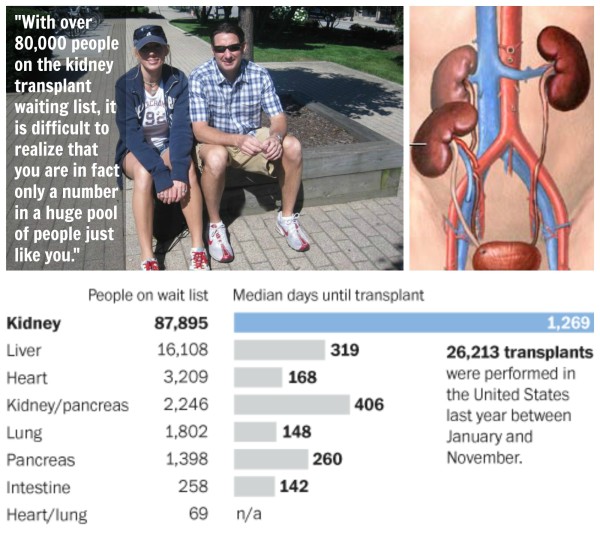 “There are over 80,000 people on the kidney transplant waiting list – and many people wait more than 5 years for a kidney from a deceased donor. The waiting list has doubled in size over the past 10 years – and it continues to grow.” -www.lkdn.org/mission.html

It is sad to realize that you are in fact only one number in a huge pool of people just like you. It is overwhelming to know that there are so many people in your same predicament and everyone is running out of time. Everyone is waiting, trusting and hoping… just like you.

I told the staff that I wanted to be tested to get on the living donor organ swap list that we had read about online. We found this amazing organization where my husband and I would be matched up with another couple with compatible blood types and genetic tissue and we would swap kidneys for our spouses. (Cool program right!) It works something like this: 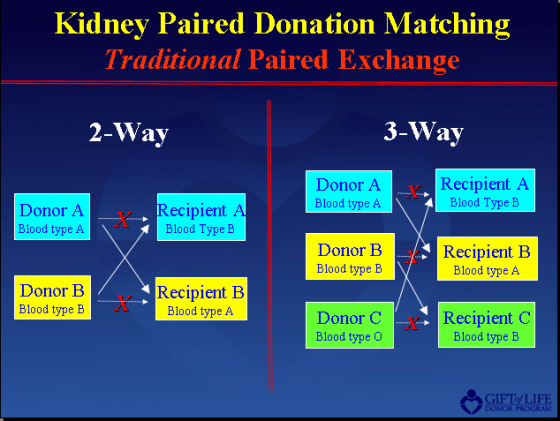 So while my husband met with his professionals and had medical exams, I went to another room to fill out paperwork. It was all very informal. Again there was no direction and the scene felt chaotic and disorganized. I moved urine sample bottles and other garbage out if the way to clear a spot on the cluttered table so that I could fill out my paperwork. Getting my living donor number and officially joining the registry for my husband was SUPER exciting for me! I was giddy even under the awkward and messy circumstances. Some feigned excitement from the staff would have been welcomed, but sadly the experience was met with a blase’ attitude. I was disappointed that it was all so clinical and my heart sank at the thought of having to send a possible donor here to be made to feel like this. So many gracious people offered to be tested as a match for Paul and I cringe at how off cast and unwelcome they might feel. Paul and I agreed that we will have to accompany anyone who goes there for testing to show our support and to let them know that we are forever grateful for their sacrifice. To prepare them and apologize if it is bad. 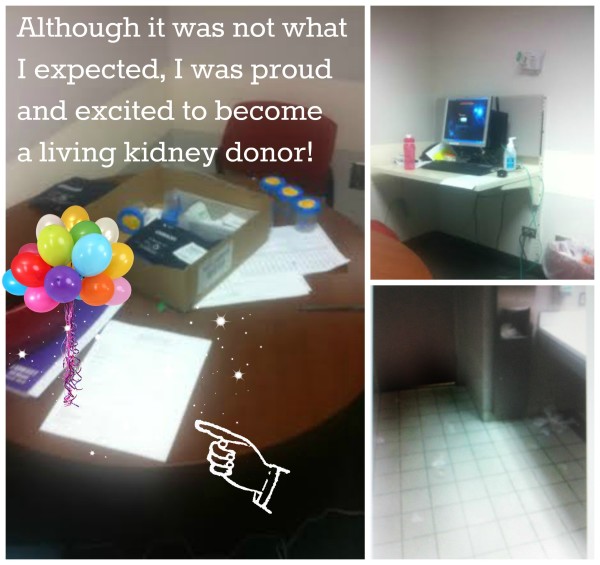 When I was asked to give a urine sample I was disturbed to hear that I had to take my specimen cup outside of the office to a public bathroom in the hallway. It was dirty from frequent use, pee on the seats from people collecting samples and not as sanitary as I felt it should be; certainly not for lab work. I kept telling myself that amongst the seeming unprofessionalism, they are a renowned transplant center so we were in good hands.

I do understand that that this is a business, and a busy one at that. I do feel so grateful that we are at RUSH hospital. I do not think that it is out of line to prefer a clean bathroom, kind direction from staff members and comfortable place to sit while waiting for literal hours. They could improve by sending out an e-mail ahead of time with suggestions for the day and some compassion training for the employees. I wish we had known ahead of time what to expect so that we were not left feeling so uneasy and inconsequential. 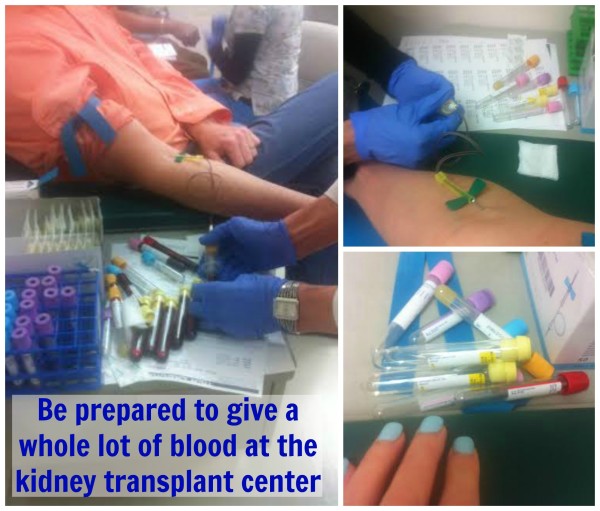 At the end of our time there we met the surgeon who would be performing my husband’s transplant surgery. He was knowledgeable, kind and funny. He went to medical school with my husband’s nephrologist and we appreciated the connection. We liked him a lot and feel confident with him! On our way out we were treated to his and her blood work together. They took about 16 vials of blood from Paul and only half that from me. The lab clinicians were really fun, personable and professional. 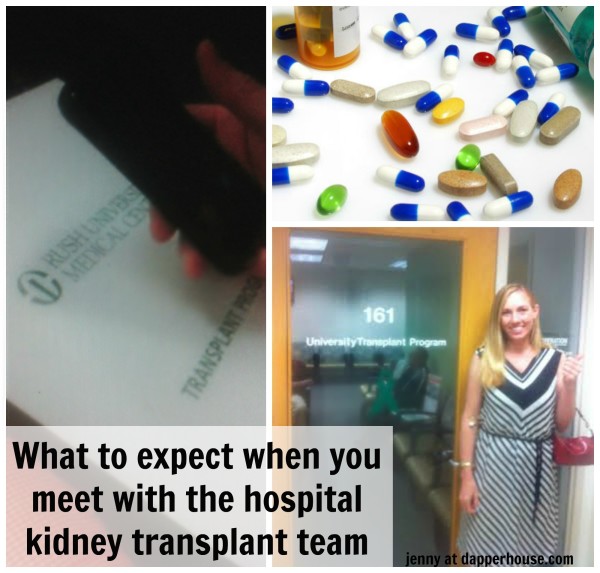 On the way out, the waiting room had cleared significantly. One of the men left in the waiting room was opening pill bottles and lining up his many meds on the arm rest of his public chair. Neither of us said a word as we caught a glimpse into Paul’s future knowing that transplant recipients must take and average of 12 – 15 pills a few times a day to keep the body from rejecting the new kidney. That transplant recipients have to comeback here to check in regularly.

UPDATE: My husband went to RUSH hospital a couple more times to complete the many required tests. He is a good candidate for a transplant (aside from his blood pressure being quite high even while taking medication prescribed to lower it.) His medical reports and case will be presented to the transplant decision makers on Tuesday June 24th. If he is accepted, he will be officially added to the transplant list.

I have to have more tests done throughout this month, but the chances are really good that he will not have to go on dialysis and can get the transplant done very soon! I will keep you all posted as I find out more in the weeks to come. This is a slow process and a rollercoaster ride with some amazing possibilities in the future. – SUCCESSFUL KIDNEY TRANSPLANT COMPLETED OCTOBER 2015.

UPDATE: Looking back on our initial experiences at RUSH, my husband and I realize that our impressions were skewed to be a bit toward the negative for a few reasons. One, living in the suburbs with the luxury of attending medical offices that are new and hospitals that feel more like a resort than a treatment center makes going to an old building feel cold. Being in a heightened emotional state from the uncertainty and diagnosis put is in a place of reserve and defense being at the mercy of uncertainty. Our experiences with RUSH and the teams there have been so AMAZING and KIND and PROFESSIONAL. We look forward to our visits and feel so blessed to be in good medical hands as well as with people who we feel, truly care about us as individuals. We recommend RUSH hospital 150% and we consider their program and people a blessing!

My husband is cold to the touch and wears a sweater in the summer. Find out Why Kidney Failure causes Anemia.

Read more about the initial diagnosis and learn more about renal failure.

How to Work the Muscles in Your Back and Shoulders