Skip to content
Jenny at dapperhouse Family fun for everyone. A lifestyle blog.
Pets 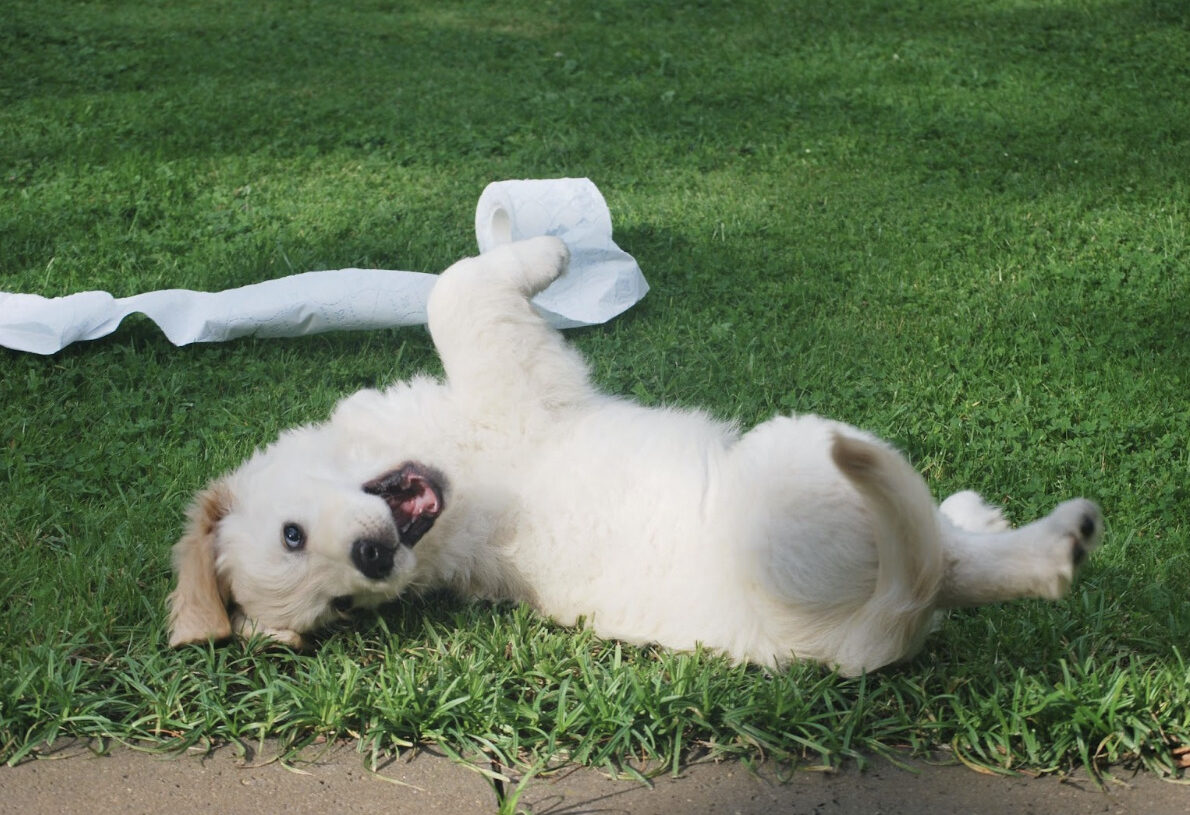 Training a puppy is no easy feat, especially when it comes to those who have never owned a dog before. It’s something that can often feel and resemble having a baby for the first time. After all, they’re very much the same in that they rely on you for food, water, walks, and going out to do their business.

There are plenty of helpful tips to ensure puppy training goes right the first time around. While it can be a lot of work, the payoff is an all-around, well-behaved pup.

With that being said, this guide will prove helpful when it comes to training a puppy in the first year of its life. This guide should give you everything you need to train your puppy properly, so make sure to bookmark it if you’re looking to get a puppy soon or in the future.

Introduce their name from the get-go

To help them learn about the environment around them, they should first know their name. This will help them understand that you’re speaking to them and that their name or the sound they’re hearing is referring to them in particular.

For those who’ve gotten their puppy from a breeder, it’s likely that the breeder has made a conscious effort to use the desired name of the puppy while they’re still around with its mummy.

Once they start responding to their name, start rewarding them with treats.

Get absorbent mats for potty training

Absorbent mats are fantastic when it comes to potty training because it avoids having the puppy pee all over your nice rugs and furniture. It’s best to try and keep the dog off the furniture for the most part, especially when they’re puppies.

These absorbent mats are easily purchased on sites like Amazon or in-store in pet-orientated businesses.

The mats will help keep the pee and poo in one place and will train them to eventually recognize where they need to go to release their bowels or bladder. Put one in their sleeping area too but chances are they’re more likely to poo or pee outside of that area as dogs don’t particularly like doing their business where they sleep!

Crate training is a great practice to do when the dog is a puppy, with some owners keeping the dog in their crates for the remainder of their adult life. It can be a great way of stopping them from roaming around the home and chewing up things when you’re not looking.

Some dogs adapt to the crate very well, while others might struggle to and instead, prefer a more open setup.

Every dog is different so it’s good to trial crate training regardless to see how the puppy gets on with it. Persevere and for most, staying in the same room with them when crate training might be needed for the first couple of nights.

While it may be tempting to give them a piece of chicken at the dinner table or some leftover scraps from a plate, it’s important to try and avoid this where possible. The reason why is that dogs should be eating their own food as it provides them with all the relevant nutrients needed to stay healthy. 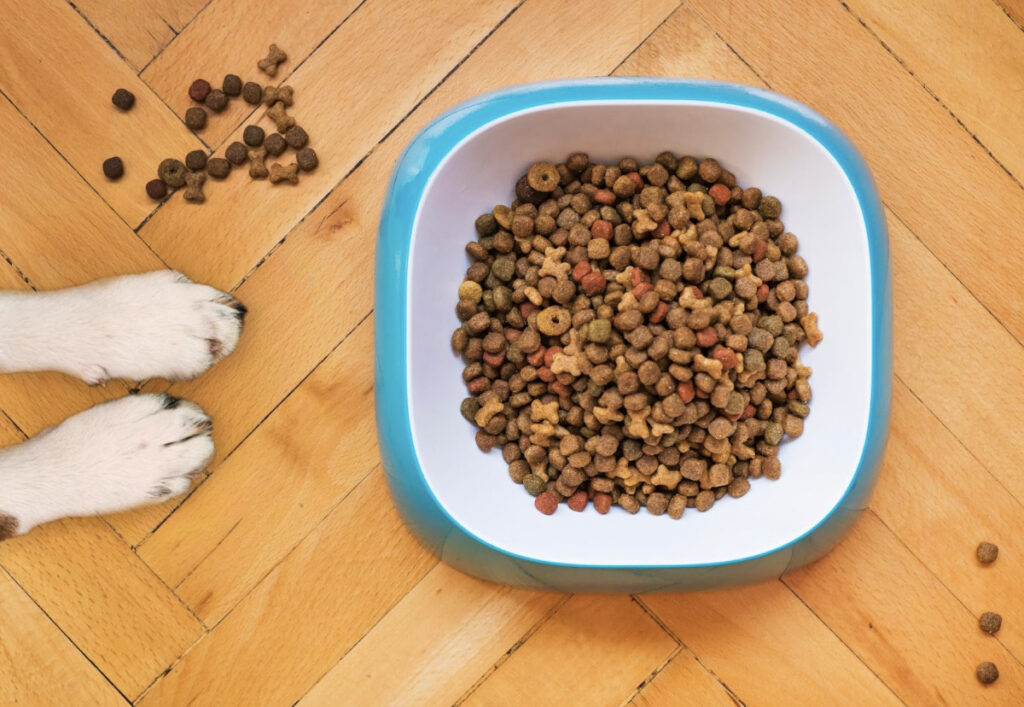 With human food, not all of it is necessarily good for them, which is why it should be avoided for the most part. The other issue is that dogs can end up growing up and expecting food from the table or from whatever you’re eating. That leads to frustrating scenarios where the dog is sitting whining for food in front of you or guests that may be eating.

Do all training with treats

As a dog trainer, training with treats is likely to prove the most effective. Dogs are very much led by their stomach, as are plenty of us humans!

Treats are great when it comes to teaching commands and gaining their attention in scenarios where they might not be letting go of an item or they are being a nuisance and need a distraction.

Get some high-value treats for those occasions when new training commands are being learned or in particular, when it comes to heel and lead training.

Teach them the basic commands sit and stay

Basic commands are something that every dog should know. The specific ones to focus on are sit and stay. Others like come and leave it/drop it are also worth teaching.

These commands do well to help show whose boss when it comes to the alpha or leader of the pack. Dogs are natural pack animals, which means they’ll often fight others to rule the roost. As a dog owner, it’s important to show them through these commands, that you are their leader.

Basic commands like sit and stay tend to be fairly easy to teach. A command like come can be a little more challenging and can be difficult when out walking and training them off the lead.

Use a long lead for lead training

Talking of leads, it’s important to introduce lead training. Lead training can help ensure they’re not pulling or tugging on the lead when you’re out walking them. It can also help to teach heel which will keep them at your heel, rather than racing off with you and the lead being dragged behind them.

Lead training can slowly lead to training them off the lead so that they can go off and explore the world around them. However, at this point, it’s important that the dog has a certain amount of training and that they know the commands for come and heel.

Get them used to a bath and brushing

To help with bathing and brushing in the future, it’s good to introduce them to it from a young age. Their first bath can be when they’re around 12 weeks old. A simple wash down with some warm water is enough to get them used to the bath/shower experience.

This can then be followed by a hairdryer to help get them used to the sound and heat of the device before the brushing comes in. 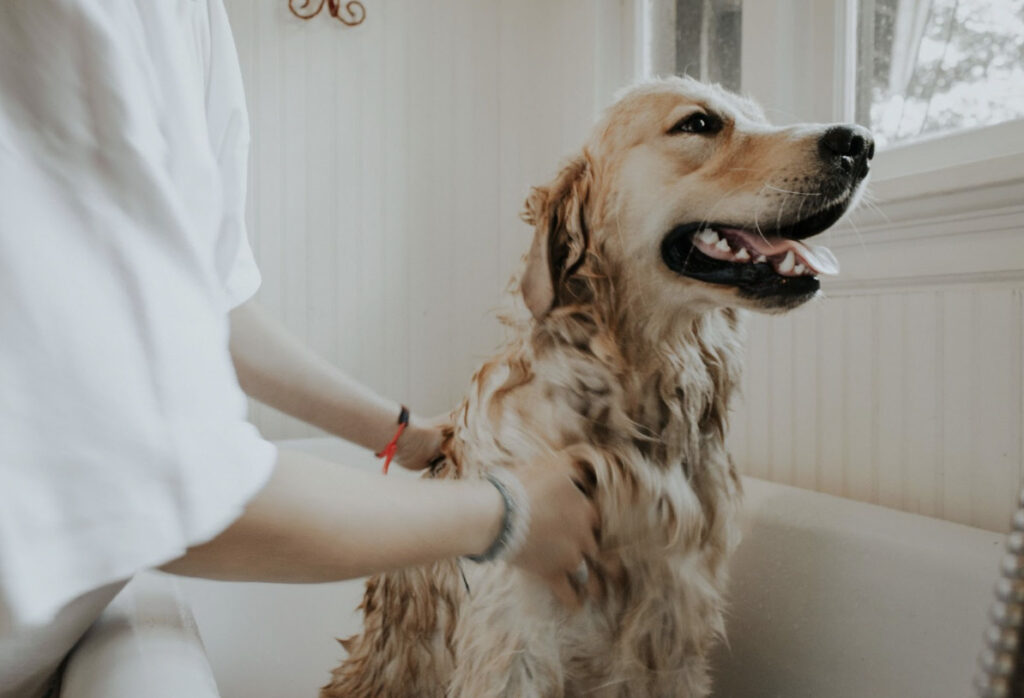 By doing this early, it means the stress and anxiety a dog feels when it comes to being groomed can be avoided. There are also grooming salons that offer puppy grooms for those who want to get their dogs done professionally every time.

Nipping is a common habit found with all puppies from a young age. However, as they get older this nipping can turn into bitting and can result in dog bite injuries. It’s important to avoid that at all costs where possible.

When a dog tries to nip, let out a high-pitched yelp and leave the dog alone for 30-60 seconds. If they continue to nip, leave the room for a minute. It’s also worth redirecting their mouth to a chew toy instead of your hand or foot.

Training a puppy in its first year of life is important and it’s something that many will enjoy the rollercoaster that comes with owning a sprightly and energetic puppy. Once they’ve been taught the basics, you can watch their personality flourish and grow.

How to Get Your Dog to Love, the Vet