Pesticides and Mitochondria: A Closer Look 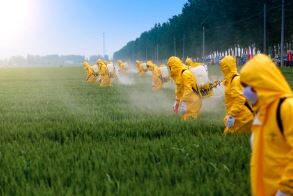 As per health care experts and specialists in the field of cellular health, mitochondria are the powerhouse of human cells. These ‘biological batteries’ have to be kept in perfect shape to produce the energy required by the body for performing vital functions. Pesticides impact the health of mitochondria in your cells. They can impact how mitochondrial cells generate energy, aid the detoxification of the internal system, strengthen the immune system, and so forth. In the worst scenario, they can kill the cells or damage them irreversibly.

Pesticides that Impact the Health of Mitochondria Adversely

The effect of pesticides on human health can be best understood by going through the impact that certain common pesticides have on the mitochondrial cells. It is very important to keep the effects of pesticides away; in other words, you need to protect your mitochondria to enjoy wellness and good health. Here are some effective and proven ways of getting the process underway.

This pesticide is mainly used for the healthy production of soybeans. It’s also impactful in killing weeds. Just like gin the case of glyphosate, GMO plants have been developed by scientists to withstand the effects of dicamba. In the US alone, there are instances of over a thousand different types of agricultural products and pesticides containing dicamba. Some popular examples of dicamba containing products are Engenia and XtendiMax. Dicamba functions in the same manner as plant hormones; it causes the erratic growth of plants. In turn, it results in killing unwanted weeds or plants fittingly.

A big concern related to dicamba is that it can drift across to the crops that that are intolerant to it.  Especially when combined with glyphosate, dicamba can cause havoc on the non-dicamba tolerant crops growing in nearby fields. The fact that dicamba can change into the gaseous state to drift to the air makes it dangerous for those who are exposed to this pesticide.

Another concerning fact about the use of dicamba is that it leaves behind residues on food crops. Though researchers believe that they are not harmful to humans, it’s important to avoid them as far as possible. Dicamba is useful for different crops like corn, soybeans, cotton, other grains, asparagus, and sugarcane. The chemicals present in the pesticide are also impactful for roadsides, lawns, golf courses, and so forth. The traces of dicamba present in the air are capable of impacting anyone living in the vicinity where it’s applied. You can also be exposed to the effects of dicamba in house dust as well as outdoors. The other ways of getting contaminated by dicamba are through drinking water found in farming areas and within the precincts of cities.

Laboratory-based studies have revealed the integration of dicamba into the internal membranes of the mitochondria present in human cells; this is specifically true when the levels of pesticide are present at high levels. This results in leaky membranes that fail to produce energy in the quantities needed by the body.

Fenpyroximate is a pesticide used in agricultural products of the likes of Assault and Danitron. It is immensely helpful in controlling the growth and spread of small-sized pests referred to as mites. Mites are known to attack the edible portions of some crops and leaves. As per lab-based reports, fenpyroximate functions by arresting the enzymes found in the mitochondria of pest cells. The pesticide helps perform against mites in all three life stages – larva, nymph, as well as an adult.

Fenpyroximate has gained approval for use on several crops, including those grown in greenhouses. It can be sprayed easily on vegetable and fruit plants to gain the best results. Despite stringent tests and measures in place, pesticide residues can be found on specific plant products such as pears, strawberries, tomatoes, grapes, apples, green beans, and so forth.

As per research-based studies, fenpyroximate is capable of damaging mitochondrial membranes. This results in a reduction of energy levels in humans. Just like the effect caused by other pesticides, even these pesticide trips on the ‘runners’ present in the mitochondrial cells. Once exposed to fenpyroximate, the ‘runners’ fail to pass electrons for the production of energy in the garb of ATP. Any mitochondrial dysfunction caused by fenpyroximate is capable of being caused by even a sparing exposure to the chemicals present in the pesticide. The concerning part is that more exposure to fenpyroximate results in a further reduction in ATP production. Fenpyroimate is also capable of interfering with the enzymes responsible for the elimination of damaged mitochondria. The clean-up mechanism is referred to as mitophagy. Any disruption in this process may lay down the grounds for more risks of Parkinson’s disease.

Ziram is a type of chemical that’s used for controlling the spread of fungi, such as brown rot and blight, on plants. Ziram is also useful for repelling birds, rabbits, and other small-sized animals. The chemical present in Ziram is usually sold in the market under the brand names of Carbazinc and Methazate.

Ziram can also be harmful to humans and create toxicity in the thyroid, nervous system, and the liver. Long phases of exposure to ziram result in doubling the risk of Parkinson’s disease in humans. The exposure to this pesticide can take place through plants and crops like apples, apricots, blueberries, and other food items; pine, fir, and other types of evergreens; carnations, chrysanthemums, roses, and other similar plants and flowers; consumer products of the likes of latex paint, rubber, plastics, caulk, etc.

As far as the effect of ziram on the mitochondria is concerned, it results in impacting different steps of the cell’s Kreb’s cycle. Kreb’s cycle is related to the production of energy in the mitochondria of the cells. Ziram is also capable of inhibiting the complicated chemical activities linked to the electron transport chain; this also results in low energy production.

Pesticides are indispensable for the production of healthy crops. An essential item in the list of farmers, owners of gardens and backyards, and most horticulturists, pesticides have several harmful effects to their credit. The concerning part is that all these harmful effects are not impacting the environment alone. They are leaving behind a spate of health issues as well. As per research reports, the effects of pesticides on the mitochondria in human cells has to be understood well to avoid important health issues. Get in touch with your nutritionist or health care specialist today.

Distractions While Driving are Legal

August 19, 2012
Jenny at dapper house is a cool lifestyle blog focused on everything family! Jen Temcio is a long time blogger who shares topics that matter to you like education, healthy living, fitness, home and much more. She shares products that make your life easier, better, and a whole lot more fun!