Skip to content
Jenny at dapperhouse Family fun for everyone. A lifestyle blog.
Family Health Our Kidney Transplant Stories

My husband marked his 6 month anniversary of his kidney transplant on April 1st 2015. He went for his routine lab work two weeks later and was told that his levels were doing so well he could now put more time in between appointments and only have to go every two months! After celebrating this milestone for two days he received another call from his doctor about his lab work. He had been flagged for having a rare occurrence of a virus called the BK Virus (Polyomavirus).

Neither of us had ever heard of this before, so of course I turned to the internet. Strangely though, there was no information about BK. I did find a few medical journal publications but that was all the information that was available to us. Even when we went into RUSH to learn more from the transplant doctor, there were only a few details that he could give us because it is both rare and newly discovered. 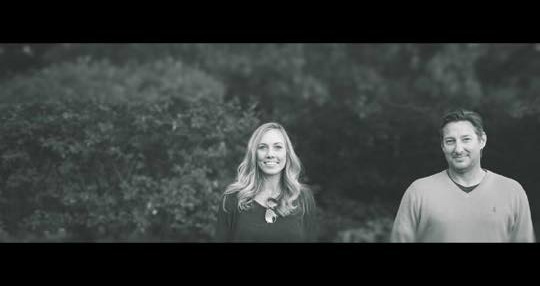 The doctor explained that up to 90% of people become exposed to BK virus by adulthood but it lies dormant because our immune systems fight it off. After my husband’s kidney transplant however, the immunosuppressant drugs required for him to not reject the new kidney left him vulnerable to the virus becoming active.

Then the bad news. . in the rare occations that this virus becomes active,  it settles into and destroys the kidneys.

The doctor explained that the catch 22 in this situation is that in order to get rid of the virus Paul has to lower his anti-rejection meds, but lowering his meds of course increases his risk for rejecting the kidney. 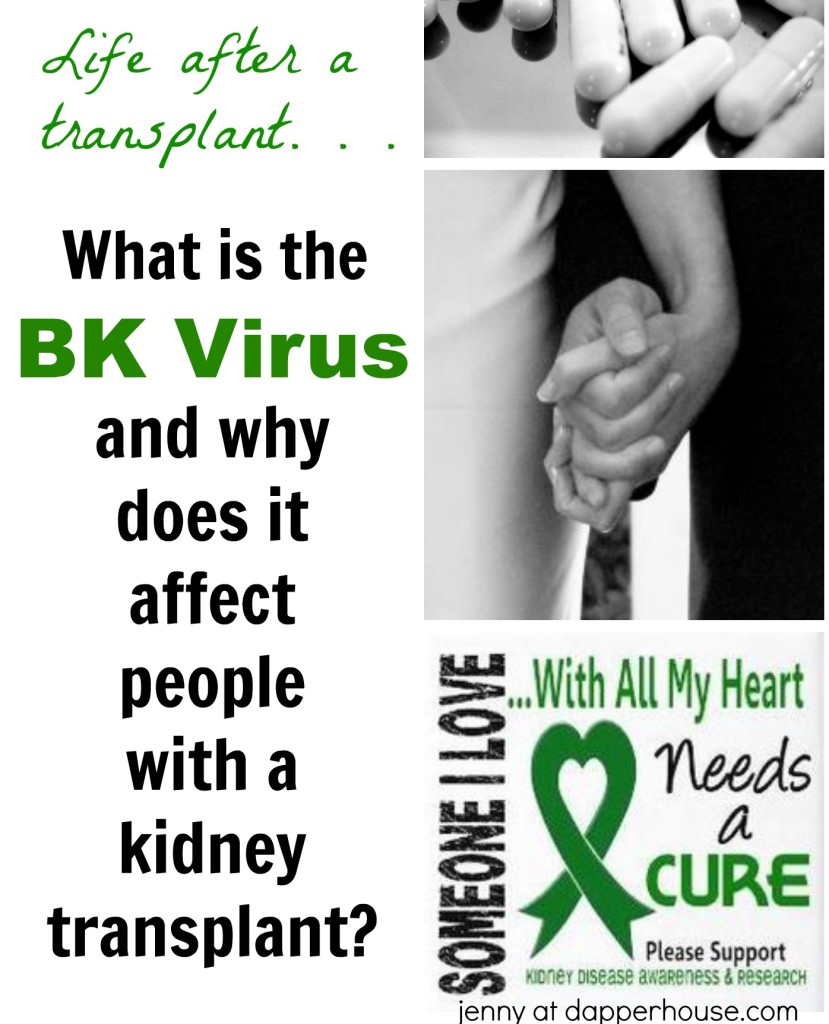 Only discovered in the 1970’s this virus  represents a challenge in kidney transplantation. In 1995 more results of medical studies were published, but doctors still need to learn more. In the late 1990s and early 2000s, BKVN resulted in irreversible graft failure in 30 to 60% of cases. This past decade has resulted in tests for early diagnosis so doctors no longer overuse the immunosuppressive therapy and a balance can try to be established to halt the virus. RUSH is one of the leading centers to be pioneering research on BK so my husband was asked to be part of the current research (a double blind study using two medications that might help fight the BK virus in transplant patients) and he happily obliged to be their guinea pig. . .or lab rat. . . or test monkey. . .

Paul hopes that his case study will result in helping doctors to gather more data so that there will be more answers for transplant patients facing BK Virus in the future. He says that while it is an unfortunate situation to be in, he is glad to have the opportunity to give back and help medical research in this area. (He has an amazing attitude, right?)

Here are some quick and general stats to note about BK Virus:

My husband is back to going to the hospital every week or two to get his blood drawn to watch the levels of all the components involved with this issue.  Doctors will have to find a delicate balance of enough immunosuppressants to keep him from rejecting his new kidney but low enough to let the trial meds try and fight off the BK. 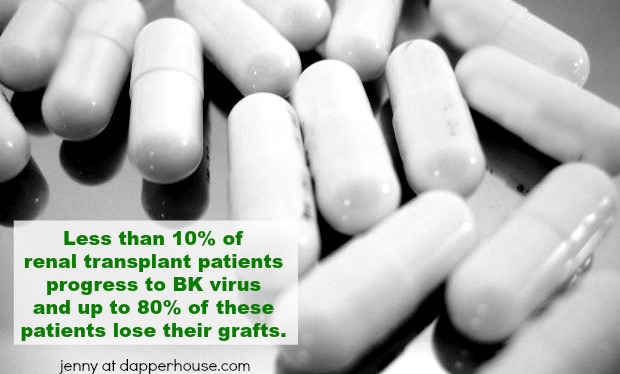 At the hospital visit my own nurse at RUSH came to talk with me. She told me that we can be happy that my husband cheated death with a transplant, but that we have to understand that he traded kidney disease, dialysis and death for a life with a new series of complications. . .  some of them standard and some of them as crazy and rare as our being a donor match in the first place. It is certainly a roller coaster ride. (And I don’t like roller coasters.)

My husband lightheartedly nicknamed this the “Buzz Kill” Virus and we are staying positive with good attitudes and humor! Luckily the virus is not in his bloodstream so we are hoping that the experimental drugs paired with the medication changes will help fight it off before it spreads to his kidney.

We would love to hear from you about your experiences with BK or transplants or whatever this article moves you to share in the comments section below.

Here are some sites that gave me  information on BK Virus. I hope that they are useful to you.

Everything You Need to Know About Antioxidants

How to Get Custom Fit® Orthotics from Dr. Scholl’s® Risk Free So You Can Keep Up With Your Family